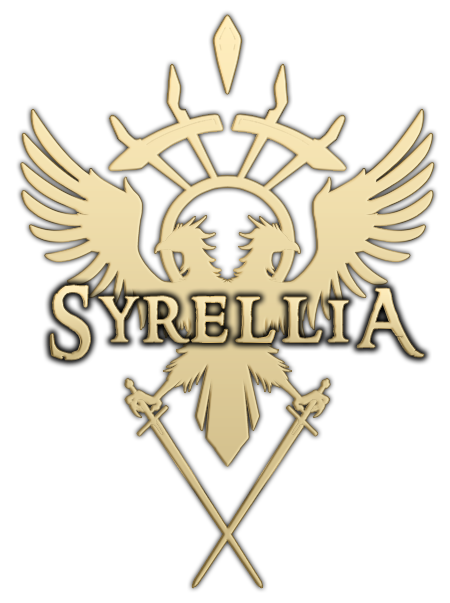 It is not necessary to read this wiki in order to join the club or RP. The Tome provides backstory details and how each concept in the world works in conjunction with the rest, but none of it is actually required for RPing. If you want to, though, you're absolutely free to.

Currently Syrellia's story is in the Eduria continent. You can find a summary of Chapters so far below if you are a newcomer to the storyline.

The Wiki doesn't stop being updated, so come back and check here from time to time.

As of the moment, no editing of the Wiki besides the Wiki creator is allowed. It'll open up another time, but for now all articles must be submitted to Arc.

The capital of the Melssentenia Republic in the world of Litvantar, Syrellia was originally started as a city divided from within. Within its walls are three factions:

The world of Litvantar is dangerous, and although part of a relatively old civilisation, Syrellia is a new city. As such, it relies on its citizens to help defend and strengthen it as well as continue building it and its mixture of technologies.

Syrellia rose from the ashes of the former Melssentenian Empire after the War of Eduria , a terrible battle between both Melssentenia and Faros that ended in Melssentenia being utterly crushed and subsequently falling to pieces. During the war, the Great Eindoan Library was razed to the ground and thousands of valuable historical documents were lost forever.

Syrellia is now on a mission to rediscover its past. None of the current Syrellians know how the city came to be or the story behind the War of Eduria. And recent discoveries made have turned up alarming signs that it was far more than anyone could have imagined...

After resolving the conflicts, Syrellia is now being repaired in peace. Faros, as it has promised, continues to send help and resources in order to rebuild the city. The Syrellians, happy that their home is now secure, have settled back into their daily routine.

But it is not time to rest yet. Syrellia's success has attracted the attention of allies across the Talhar and Estinia Seas, not to mention the amazement that the city has finally managed to unite three completely different technologies. They have troubles of their own too, and they have come to ask Syrellia for help.

Members will pick one of the two continents to proceed after the Second Chapter: the Islands of Rinmoria or the Mindaladiss Archipelago.

The plot is currently on hiatus; the group will continue as a conventional RP for the time being.

A danger has stirred in the heart of the world. With the other major civilisations of the Semara Region, Syrellia answers the call to investigate the problem - and discovers a great horror that threatens the very existence of Litvantar.

This Chapter is only unlocked if the club receives enough active members to support it. It is a full-on war and thus would need members willing to fight for the city.

Retrieved from "https://syrellia.fandom.com/wiki/The_Tome_of_Litvantar?oldid=4283"
Community content is available under CC-BY-SA unless otherwise noted.